It seems to be December already. Again! So I suppose the Scrappy Sundays ought to look at using up some of those red, green and white scraps that we will have accumulated. Chris was playing with these when making the braid strips the other week but if we go back another couple of weeks there were Christmassy (oops, said the C word) scraps used in some of the Dresden Plate blocks.

These may (or may not) be destined to be turned into a runner or table mats at some unspecified time in the (distant) future.

But the Dresden Plate can be turned into other useful things at this time of year. Such as a wreath

or a tree skirt

The big one is still lacking its ribbon – and may well continue to lack its ribbon!

If ever a block called out for scraps it has to be the Dresden Plate in all its guises. Each petal only uses a tiny piece of fabric (especially when making 6 inch blocks) and they can all be different. Even when you use the same fabric more than once in a block you still won’t need a huge piece. Here’s one Chris made earlier (although it has to be said – Barbara did the hand applique!)

The blocks are six inch squares and have the same orange fabric for the centres but the petals are scraps of blues or yellows.

but note that it has quite a large centre circle (or it will have one day).

You can use fabric strips to cut your petals from – these were jelly roll strips but any scrap strips will do. This block is about 16 inches square. 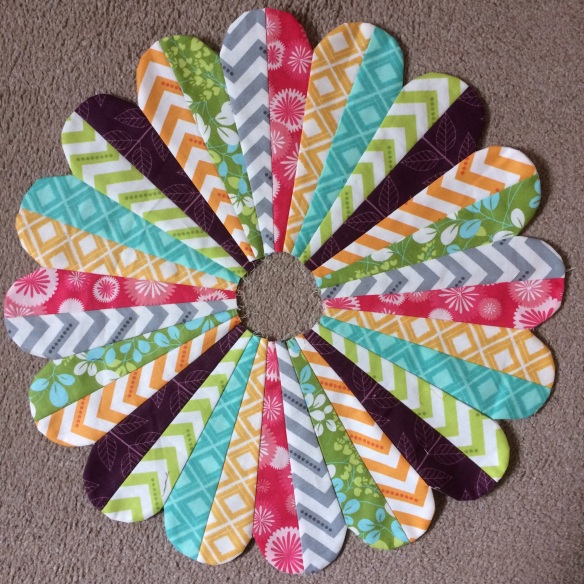 Who says your centre has to be a circle? Here are a couple of examples from Chris’s students

You can have a lot of fun changing the size of the centre, or the size and shape of the petals as you can see from these other examples from students work

Normally when making a Dresden Plate you stitch the petals into pairs then the pairs together as you build up the units until you just have two halves to join – and hope it all lies flat – as in these two examples.

and, if you have a large enough scrap you can even ‘fussy cut’ some of the petals and/or the centre.

Over on our sister blog Meadowside Designs there is a whole series running on different Dresden Plate designs – they are all 16-petal ones and you can download the templates to make 12 inch blocks. Pop over there, have a read – its been running for a couple of months now so scroll through to find all the posts – and follow the links to the tutorials and the templates.

Flashback to an extremely popular Saturday class  – Dresden Delight.  Dresden Plate has so many possibilities (and Chris produced a book on some of them) it’s always a delight to teach the basics and beyond.

…   one fancy Nine Patch Dresden Plate, fabric choices and cutting by Chris, first part of sewing sabotaged by Barbara as part of THAT disastrous class demo, second part remedied by Chris and shown here earlier as a completed plate.  Determined to salvage a modicum of professional pride, Barbara decided she’d better get on with finding a background and doing the last bit of stitching down.

Various fabrics were auditioned for the background but nothing really seemed to hit the spot until black appeared, which made the colours and prints richer and bolder.  So black it was – the perfect target for cat hair and stray threads too! 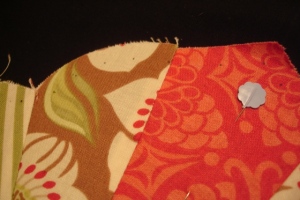 Then it was time to turn back the seam allowance using the dots as a guide, folding carefully and using smallish tacking stitches to secure. 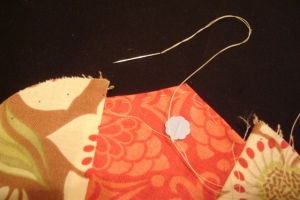 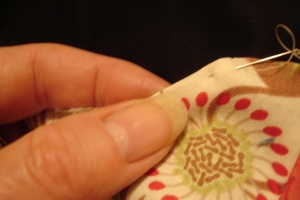 From this point it would have been pretty straightforward just to position the plate on the background, pin in several places and get right to the stitching down.  But Barbara was determined not to    leave room for error so she tacked the plate into position next, again with fairly small stitches and quite close to the edge.  And at last to the stitching itself  (the above preparation took very little time if you discount the part where you linger over the starching and pressing to savour the aromatic steam!).   Barbara used her favourite everyday fine cotton sewing thread (Aurifil 50)  in a dark cream shade instead of worrying about matching thread colour to fabric.  You can see the scale of the stitch and how it is formed from these pics

The needle comes through the background and just into the folded edge and then makes a very short straight stitch down and into the background, diagonal slide across the back and start all over again.  Above, the needle is a little bit too far into the plate, this is better –

This makes a slanting stitch on the back

and you can see from this pic a knot and backstitch finish of thread inside the stitched plate edge.

Some close-ups of ok and less ok stitching, starting with less – 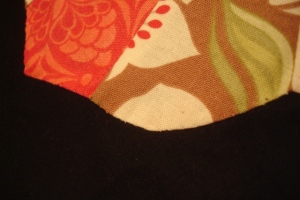 – this is slightly better for smoothness, notice that the stitches are less visible than you might expect.

Plate stitched into position, tackings removed and put out of reach of nosey cat, back to starch and steam, RS down onto a clean towel and it’s done.  Interesting how different the colours look under electric light and daylight – stitching pics are electrically lit, following pics are daylight. 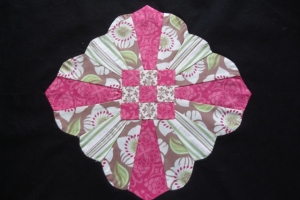 Now there needs to be a further delicate negotation regarding border/small corner fans/fabric etc, but for the moment at least we remain undefeated by a Dresden Plate!

PS from Barbara – Chris is too shy to say that she produced a Dresden Plate booklet which has lots of ideas and templates…. you should find this on our website www.chrisandbarbara.com

PPS from Chris – and of course Barbara is too polite to say that if Chris hadn’t machine stitched right to the edges of the plate petals it would have made the turning under and tacking so-o-o-o much easier!

Sometimes our plans seem to veer a little off course.   Last week Barbara managed to totally forget to show how to stitch Dresden Plates to a background,  because (she says) everyone got so excited over Chris’s demo of Dresden Plate and fussy-cutting Kaleidoplates.  So this week she backtracked and covered the basic applique stitch but that left less time for us to demo machine quilting, walking foot and free motion, and a little bit of hand quilting.  And all this meant that we didn’t get time to take another look at everyone’s blocks and play around with settings.  S0 – next week, our final week for this course, is going to be action packed with sashings, settings, borders and bindings!! 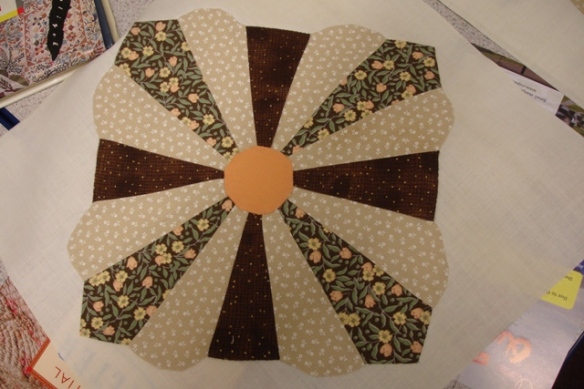 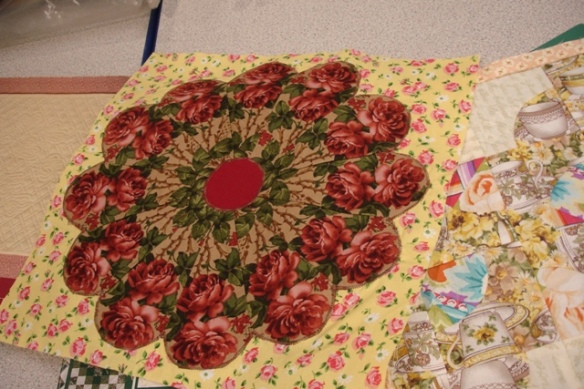 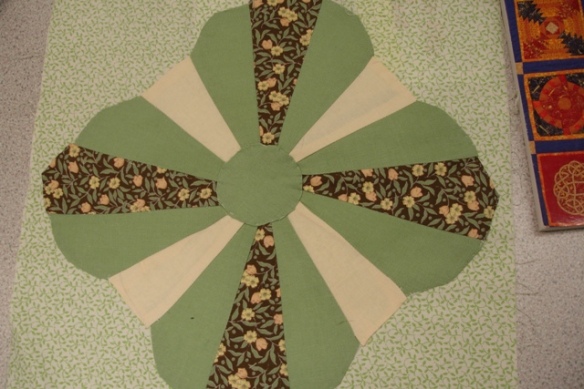 We’re off to Quilter’s Trading Post in Whitchurch today to collect Chris’s quilt for Trentham/Uttoxeter/Quilts in the Garden, which means we will have a coffee and cake opportunity as well as retail therapy – what could be better?

A wonderfully warm Sampler Class – our favourite caretaker had made sure the heating was blazing away so we all finished the evening in a very warm glow!  Lots of lovely homework  from the curved seam demonstration last week and now everyone has a satisfying pile of blocks to begin thinking about putting together.  We spent some time laying out blocks on the floor and standing back and making admiring noises, experimenting with setting straight and/or on point and into strips.  Next week we’re going to be looking at the basics of machine and hand quilting, with some quilt-as-you-go pointers and demonstration thrown in for good measure. 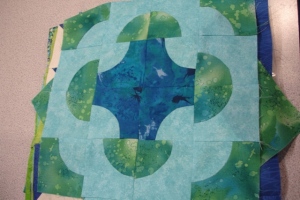 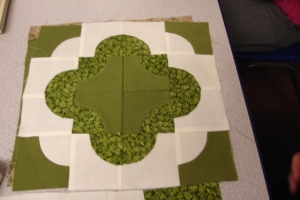 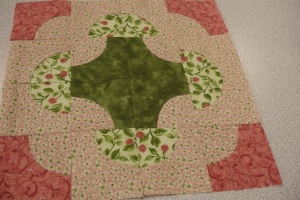 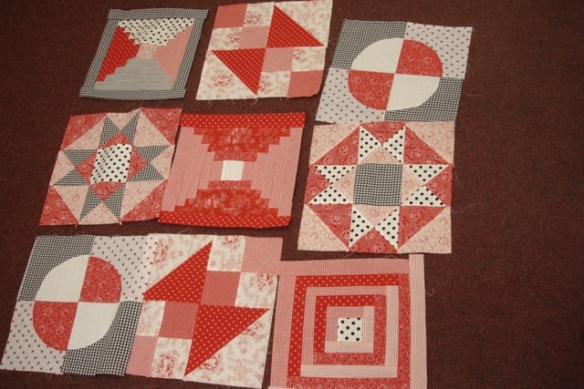 If Barbara gets down to work and concentrates, we’ll have more pics on our Flickr site very soon – and the EQdoodle is due to be updated also ….. back to coffee and chocolate!

We are Chris Franses & Barbara Chainey – quilting teachers, writers and designers – and on these pages we’ll share some of our many quilting plans, projects and general procrastination.

We really enjoy reading your comments – we usually reply in the Comments section of each post.

Check in with our sister blog and website Meadowside Designs for quick and easy quilt patterns and our exclusive Heritage Quilt patterns based on selected vintage quilts.